My last post got me reminiscing about the good old days in New York City, where, for a very brief time I was the set designer for Six Figures Theatre Company.

Sadly, we moved to California before I had a chance to really explore off-broadway theatre. ‘The Awakening’ was the only set I created for them, along with ‘Clowning the Bard’ during the Fringe Festival of 1998.

Let me set the stage, so to speak, from my point of view. I was to design a set for a play that had at least 20 scenes on a stage that had no fly aways and the whole thing had to be easy to install. Plus, the important finale was where the main character commits suicide by walking into the ocean.

The part that nobody ever knew about, was that I created the drapes in our studio apartment in the village. Our apartment was only 9′ tall and the                 drapes had to be 14′ tall. So I was not able to test them out until 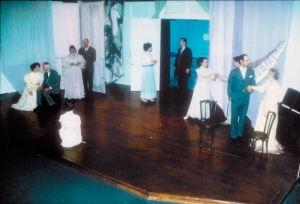 the day of the opening to see if they were going to function. God bless velcro!

I created a painting titled ‘The Awakening’ which was used as the postcard and the program, and auctioned at the benefit dinner to S. Krasnow. 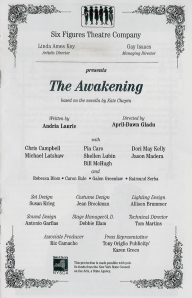 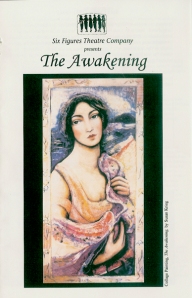 I am only including the part of the play’s review in the ‘Westside Resident’ that states that the plays greatest achievement was the set design. (not a good thing for the play as a whole!)

While I’m at it, during my brief brush with New York theatre, I created this wall design for  ‘Goodnight Desdemona’ with the Mint Theatre. That’s me in red during the winter of 1998.

2 thoughts on “The Story Behind The Awakening”