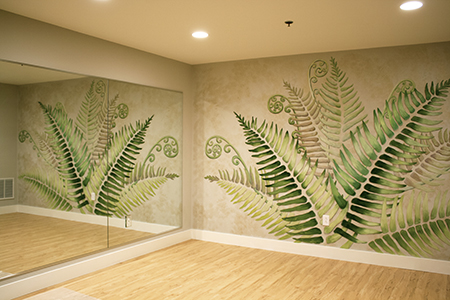 This interior wall mural, which I’ve titled ‘Yoga of the Ferns’, is located in the small hot room at Hot Yoga Charlottesville. Created June 2014.

When I learned that the owner was interested in having something painted on this wall, I poured through my books of inspiration. My initial idea was to paint people in yoga postures among symbolic types of plans, such as lotus, chrysanthemum or bamboo. I definitely wanted some type of plant imagery because plants are green and calming, yet alive and rejuvenating. I came across a picture of a fern stencil. I liked the idea of the fern. They are a local plant here in Virginia and their stems are like backbones, they uncurl like we do in yoga presenting a supple and flexible support.

I also liked the idea of the stencil, but a real stencil seemed impossible as it would have to be very large, unruly and expensive. A stencil felt  symmetrical and structured and that’s what I wanted to achieve on the wall – good balance, good form and control.

The room is a bit square and boxed in. The desire was to change the feeling of the room, open it up and make it feel bigger. I wanted to make you feel like you were in an earthy setting.  A also wanted the colors to be somewhat calming, yet invigorating by limiting the palette to green with some rosy tones, while intensifying the light and dark values. My hope was that the structure and the symmetry would allow focus, rather than distraction, for the practicing student.

I grew up in Fargo, North Dakota. Frequenting the book department at Herbst Department Store was one of my favorite past times as a teen. It brought to me knowledge of many things that just didn’t exist in Fargo, one of which was a book titled ‘Yoga and Health’, copy write 1953. It would have been during the 60s that I tried to teach myself yoga.

I didn’t find yoga again until 2008. I lived several block from a Bikram studio in Ventura California and it looked interesting. I tried it out and was immediately hooked on the intensity of it and started my practice under a teacher who was very strict about form. This all came at a big transition time in my life. I was starting to have some miserable physical symptoms: arthritis, osteopenia and grumpiness to boot. In 2010 we moved from California to Virginia and for the first two years I had no access to Bikram yoga. I realized the benefits I had been gaining from my practice. When a new studio  in Virginia Beach opened in December of 2011, I was at the grand opening waiting for the doors to unlock. I did my first 30 day challenge there and gained the benefits. The arthritis in my hands went away, I got my heart palpitation under control, I gained tremendous flexibility and strength. I’m a sworn believer in Bikram style yoga.